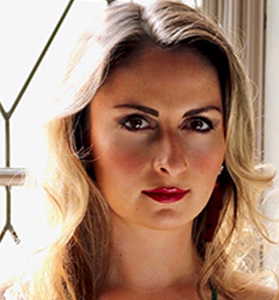 American soprano, Sydney Kucine, brings the highest caliber of vocal technique and musicality to each performance, captivating audiences around the world. In 2022, Sydney made her Carnegie Hall Debut, singing the soprano soloist in the Hayes Gloria. In the 2019 season, Ms. Kucine made her professional debut with Sarasota Opera as an Apprentice Artist, where she covered Papagena in their main stage production of Die Zauberflöte. She also performed Helena in A Midsummer Night’s Dream (Chautauqua). Sydney made her professional New York City debut, singing the role of Micaëla in La Tragedie de Carmen (City Lyric Opera), and performed the role of Adina in Athens, as well as Mozart’s Coronation Mass in Vienna and Lisbon, and Naiad in Ariadne auf Naxos in Athens. As a young artist, Ms. Kucine has performed the roles of Micaëla in Carmen (Chautauqua), Juliette in Roméo et Juliette (Mannes), Musetta in La Boheme (San Francisco Conservatory), Susanna in Le Nozze di Figaro (Oberlin in Italy), Papagena in Die Zauberflöte (Berlin Opera Academy), Lucia in Lucia di Lammermoor (Mannes), and Fortuna in L’incoronazione di Poppea (Oberlin in Italy).

Ms. Kucine is a recipient of numerous awards. Most recently, she was an international finalist in the Sigma Alpha Iota Concerto Competition at the Chautauqua Institution. In 2017, as well as a semifinalist in the Mondavi Center Competition. At the young age of eighteen, she made her Carnegie Hall debut, and sang in a masterclass presented at the Metropolitan Opera Guild. Ms. Kucine is also a devoted recitalist. She has given solo recitals across the United States, from San Francisco, California to Portland, Maine.

Ms. Kucine’s has studied Italian at the Accademia Europea di Firenze, and is fluent in both English and Italian. The soprano holds an undergraduate degree from The San Francisco Conservatory of Music where she studied with Deborah Voigt, and has completed a Master of Music degree at Mannes School of Music at the New School, New York, where she was a student of the late Ruth Falcon.