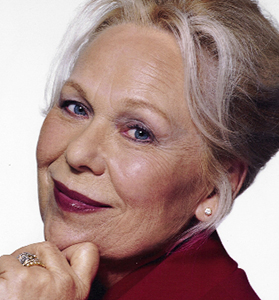 “I doubt if there is anyone with more comprehension of Madame Butterfly than Renata Scotto. That wealth of experience paid rich dividends, creating one of the most absorbing and emotional butterflies I have seen in a very long time. Scotto influence was obvious. Together, she and Xini made everything phrase, gesture and expression count.”
– Opera Now

The mention of Renata Scotto immediately brings to mind artistry of a personal expression achieved by very few performers in any area of the performing arts. Born in Savona, Italy, Renata Scotto has performed regularly on the stages of the world’s great opera houses and concert halls. Her gifts as a unique singing actress have been acclaimed at the Teatro La Scala in Milan, the Metropolitan Opera, the Royal Opera House Covent Garden, the Bolshoi, the Vienna State Opera and the Paris Opera, to name only a few. Her repertoire, comprising more than sixty roles, has an extraordinary range and diversity, including the bel canto operas of Bellini, Donizetti and Meyerbeer, the verismo works of Puccini, Mascagni, Cilea and Giordano, and twelve major Verdi heroines. She is perhaps best known for her portrayal of Madama Butterfly which she sang in countless productions and recorded twice for CBS.

Ms. Scotto inaugurated the first Live from the MET PBS telecast as Mimi in La Boheme in 1977 and appeared on that series for eight consecutive seasons. She was seen in the title role of La Gioconda in the first live international telecast from the San Francisco Opera, winning an Emmy Award for her portrayal and was the subject of a PBS documentary feature, Renata Scotto – Prima Donna.

A prolific recording artist, Ms. Scotto has recorded for all of the major recording labels including EMI, Decca/London, CBS, Deutsche Grammophon, RCA and Hungaroton. She won the Grand Prix du Disque for her Deutsche Grammophone recording of Rigoletto and both the Palm d’Or and the Italian Critics Award for the CBS recording of Suor Angelica. A sample list of her videos include Il trittico, Otello, L’Elisir d’Amore, Lucia d Lammermoor, Fedora, plus many concerts and recitals, while her notable CDs include Norma, Adriana Lecouvreur, Turandot (Liu), Edgar, and Verdi’s Requiem.

Ms. Scotto continues to add to her activity as stage director after her debut at the Metropolitan in 1986, with Madama Butterfly and then at the Arena di Verona, Genoa’s Teatro Carlo Felice, Dallas Opera, Palm Beach Opera, Florida Grand Opera in Miami, and the Teatro delle Arts center in Ancona with the same work. In March 1995 she created a new production of La Traviata at the New York City Opera, which was telecast nationally over PBS in the “Live from Lincoln Center” series. For this she won an Emmy Award for Best Live Musical Event. Other notable productions include Il Pirata and La Sonnambula at the Festival Belliniana in Catania, La Sonnambula for Florida Grand and Michigan Opera Theater, Norma for the Finnish National Opera, Adriana Lecouvreur in Santiago, Tosca with Deborah Voigt in her role debut for Florida Grand Opera where she also directed La Traviata and La Sonnambula, Lucia di Lammermoor for the Megaron Theater in Thessaloniki, Turandot in Athens, a new production of Catalani’s La Wally for Bern and Bologna, and La Boheme and Un Ballo in Maschera for the Lyric Opera of Chicago.

Ms. Scotto’s autobiography More Than a Diva was published by Doubleday.