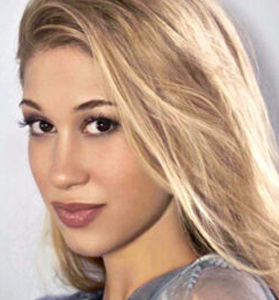 Israeli – Portuguese mezzo-soprano, Maya Yahav Gour, began her musical career as a jazz singer performing in festivals and clubs in NYC and around the world. She is currently a member of the prestigious Dutch National Opera Studio in Amsterdam. This past season with the DNO she performed roles in Anna Bolena (Smeton cover), Der Zwerg (Dritte Zofe), Salome (Page), and La Traviata (Flora). Prior to that  Maya sang the role of Smeton in concert with the Dutch National Opera. Performances canceled due to COVID included Rosina in I Barbiere di Siviglia for the Sacramento Philharmonic, the Stewardess in Jonathan Dove’s Flight for Seattle Opera, Dinah in Trouble in Tahiti for the Dutch National Opera, and her Carnegie Hall debut in Mozart’s Vesperae solennes de confessore. Upcoming performances include, Hänsel in Hänsel und Gretel for Reisopera, Melibea in Il Viaggio a Reims with Teatro Municipal de Santiago, and a return to the Dutch National Opera for the World Premiere of Animal Farm by composer Alexander Raskatov.

After graduating from the Mannes School of Music, Maya was immediately engaged to make her Seattle Opera debut in the role of Tisbe in Rossini’s La Cenerentola. She was then engaged by Marilyn Horne to sing the role of Hänsel in Humperdinck’s Hänsel und Gretel for Music Academy of the West. Maya previously sang Hänsel for the Savannah Voice Festival, Rossini’s Stabat Mater and Pippo in Rossini’s La Gazza ladra for Teatro Nuovo, Angelina in Rossini’s La Cenerentola with Opera in Williamsburg, Lucretia in Britten’s The Rape of Lucretia at the Oslo Opera House, and the title role in Massenet’s Cendrillon for the Trentino Music Festival.

Past engagements include the title role in Ravel’s L’enfant et les Sortilèges with Opera on the Avalon, The Stewardess in Flight with Opera Parallèle, Lucretia in Britten’s The Rape of Lucretia at the Oslo Opera House, Cendrillon with the Miami Summer Music Festival, Cherubino in Le Nozze di Figaro for the Tuscia Opera Festival, and Rosina in Il Barbiere di Siviglia with Tuscany Music Festival. With the Israel Vocal Arts Institute, Maya has performed Veronica in Bizet’s Le docteur Miracle, and L’enfant et les sortileges under the baton of Paul Nadler.

Maya performed a variety of roles for Mannes Opera including, the Stewardess in the NYC premier of Flight, the Abbess in Puccini’s Sour Angelica, and Maddalena in Rossini’s Il Viaggio a Reims, all under the baton of Maestro Joseph Colaneri.