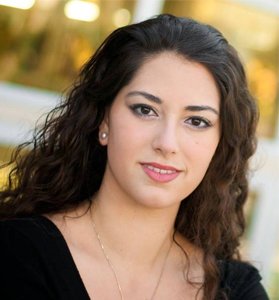 Ms. Kaganskaya has performed the roles of Mrs. Rockefeller/Natalia (Frida) and Käthchen (Werther), and study-covered the role of Charlotte (Werther) at Florida Grand Opera. Her other recently performed roles include Dorabella (Così fan tutte), Ottavia (L’incoronazione di Poppea), Serse (Serse), Olga (Eugene Onegin), Hostess (Boris Godunov), Marta (Iolanta), La Nourrice (Milhaud’s Médée), Mexican Woman (A Streetcar Named Desire), Dinah (Trouble in Tahiti), and Julia Bertram (Mansfield Park). Up and coming performances include the role of Rowan in the workshop of the new opera We Wear the Sea Like a Coat with Opera Ithaca.

Ms. Kaganskaya was a Studio Artist at Florida Grand Opera, and has been an Apprentice Singer at the Santa Fe Opera, a Marion Roose Pullin Studio Artist at Arizona Opera, a Mosher Studio Artist at Opera Santa Barbara, and a Young Artist at the iSing International Festival in China. She is an alumna of the OperaWorks Advanced Artist Program and the Russian Opera Workshop at the Academy of Vocal Arts, and earned her MM  and PGD at the San Francisco Conservatory of Music, under the tutelage of Catherine Cook.