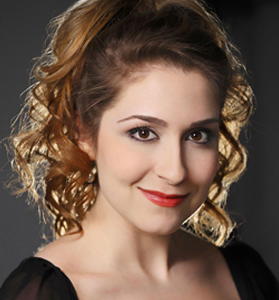 ” In Vancouver Opera’s latest Traviata, [Violetta] is brilliantly portrayed by Canadian soprano Emily Dorn. She sings with an impressive range, both tonally and expressively, to carry the vast repertoire of the role, from sparkling duets to pensive solos. And she has the acting chops to bring off her character’s mercurial mood shifts. Altogether a nuanced – even mesmerizing – portrayal”. – Vancouver Observer

Canadian Soprano Emily Dorn is thrilling audiences with her “warm, rich middle, a shimmering, flexible top, excellent control… and her exquisitely beautiful delivery” (Opera News). This coming season Emily  will return to Opera de Montreal to sing Marguerita Xirgu in Ainadamar by Golijov, and Landestheater Detmold to perform Donna Elvira and make her debut in the role of Tatyana in Eugene Onegin. Last season she made exciting role debuts with the Landestheater Detmold including, Contessa Almaviva in Le Nozze di Figaro, Hanna Glawari in Die Lustige Witwe, the Governess in The Turn of the Screw, and Isabella/Mama in Detlef Heusinger’s new opera Die Zeitreisemaschine,  performed in cooperation with the Bergenzer Festspiele.

Recent performances have included her debut as Lisa in Das Land des Lächelns for Detmold, Violetta in La Traviata with the Vancouver Opera, Beethoven’s Ninth Symphony with Teatro Massimo di Palermo, Mass in C with the BBC Philharmonic, Gretel in Hänsel und Gretel, Baronin Freimann in Der Wildschütz, Frau Hudetz in Der Jüngste Tag, and Julia de Weert in Der Vetter aus Dingsda, Margarethe in Faust, Fiordiligi inCosi fan tutte, and the title role in Von Flotow’s Martha all with the Landestheater Detmold. She recently returned to the US for Micaela in Carmen for her Seattle Opera debut and made her Italian debut in Mozart’s Mass in C with the Orchestra Sinfonica Nazionale Rai.

From 2012 – 2018 Emily was a member of the ensemble of the Semperoper Dresden. While at the Semperoper Emily was heard as Katja in Die Passagieren,Pamina in die Zauberflöte, Violetta in La Traviata, Musetta in La Boheme, Micaela in Carmen, Gretel in Hänsel und Gretel, Adele in Die Fledermaus, Fiordiligi in Cosi fan tutte, Bubikopf in Kaiser von Atlantis, the title role of Regina under the batan of Simone Young, and Susanna in their new production of Le Nozze di Figaro conducted by Omer Meir Welber and directed by Johannes Erath. This production was then featured at the Sanvonlinna Festival.

Emily has been a recipient of numerous honors, winning first place in the New England Regional Metropolitan Opera National Council Awards, second place awards from the Gerda Lissner and the Guilio Gari International Voice Competitions, third place winner in the Licia Albanese-Puccini Foundation, and an Encouragement Grant from the George London Foundation