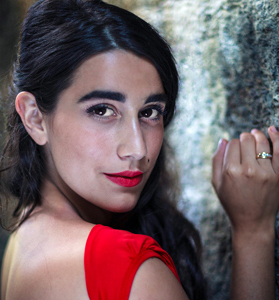 “You didn’t need to understand the text about the “silvery moon in the velvet night” in Dvorak’s “Song to the Moon” from Rusalka: It was all right there in the silvery orchestrations, and in the velvet soprano voice of Elena Perroni.” – Philadelphia Inquirer – Welch National Opera 2021 – The Daily Telegraph

Ms. Perroni made her professional debut with Opera Philadelphia, singing the role of Doris Parker in Charlie Parker’s Yardbird, at the legendary Apollo Theatre in New York City, and reprised the role in her English National Opera debut in the summer of 2017.  Most recently the soprano performed Brahms’ Ein Deutches Requiem with Asher Fisch and the West Australian Symphony to great critical acclaim. This past season she also performed the title role of Iolanta with West Australian Opera, and made her Carnegie Hall debut performing Schubert’s Mass in G.  She returns with Maestro Fisch and the Western Australian Symphony this summer for Britten’s War Requiem. Elena made her role debut as Violetta in Verdi’s La Traviata for West Australian Opera.

In addition to her recent successes on the operatic stage, Ms. Perroni is quickly making a name for herself in the concert hall.  In 2017, she made her Philadelphia Orchestra debut singing selections from Dvorak’s Rusalka. She returned to the Philadelphia Orchestra  in 2018 in a concert featuring selection from Eugene Onegine as Tatyana, and for Nuits d’ete. Other concert engagements include Mimi in La Boheme with Quad Cities Symphony Orchestra, Juliet in Tchaikovsky’s Romeo & Guliet with the New Jersey Symphony Orchestra, Sister Constance in Poulenc’s Dialogues des Carmelites with West Australian Opera, and Maria in Leonard Berstein’s West Side Story, with the Reno Philharmonic.

Ms. Perroni is a recent graduate of the world renowned Curtis Institute of Music, where she has performed many leading roles including Adina in Donezetti’s  L’elisir d’Amore, the title role in Massenet’s Manon, Anne Truelove in Stravinsky’s  The Rake’s Progress, Susanna in Mozart’s Le Nozze di Figaro, as well as Lauretta Puccini’s Gianni Schicchi, and Magda in La Rondine.  Ms. Perroni has also performed the leading roles of Mimi in La Boheme and Gilda in Verdi’s Rigoletto at the Chautauqua Music Festival.

In 2018 Elena was both a NY regional winner in the Loren L. Zachery competition and a semi-finalist in the Belvedere Competition.