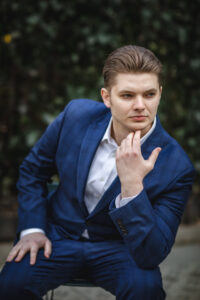 American bass baritone Wil Kellerman recently returned from Sicily where he made his international debut, singing Marco in Puccini’s Gianni Schicchi and Baron Douphol in Verdi’s La Traviata conducted by Kamal Khan.  A cum laude graduate of James Madison University, Mr. Kellerman performed the role of Colline in Puccini’s La bohème and appeared in several other productions. Wil has been an artist at IVAI and the Chautauqua Institute. His recent engagements include Alcade and Chirurgo in Verdi’s La Forza del Destino with the New Amsterdam Opera, and The Secret Police Agent in Menotti’s The Consul with Bronx Opera.  This spring he will return to the Bronx Opera to sing the title role in Gilbert and Sullivan’s The Mikado.

In the summer of 2018, Mr. Kellerman was an apprentice artist at Teatro Nuovo, where he worked extensively with Maestro Will Crutchfield.  While in graduate school at the Mannes School of Music, he performed the roles of Figaro in Mozart’s Le Nozze di Figaro, and Nick Shadow in Stravinsky’s The Rake’s Progress under the baton of Maestro Joseph Colaneri. Past summers have seen the bass baritone at Songfest in Los Angeles.