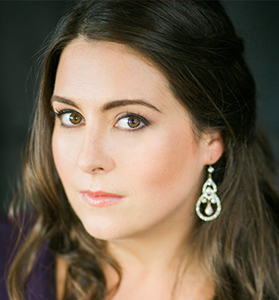 As Leonora in Verdi’s Il Trovatore, she was praised for her “dark and meaty” voice and “stunning, shimmering pianissimo.”

Soprano, Victoria Cannizzo was recently described as “a delight, full of charm and great vocal skill” in her portrayal of Alice Ford in Verdi’s Falstaff.  The soprano’s recent engagements include the title role debut in Puccini’s Tosca at the Teatro Verdi in Casciana Terme, Italy with the Accademia Giuseppe Verdi as well as the debut of Donna Elvira in Mozart’s Don Giovanni with the South Dakota Symphony Orchestra. Most recently she performed Mozart’s Requiem at Carnegie Hall with Mid America Productions, and debuted the role of Cio Cio San in New Jersey. She debuted the role of Donna Anna with Opera Hong Kong, and the role of Suzel in Mascagni’s L’amico Fritz with Baltimore Concert Opera. Future engagements include her debut in Sweden at Opera Pa Skaret Opera as Liu in Turandot (canceled due to Covid-19), and the role of Tosca in Opera in the Heights and a concert in Charlottesville.

Ms. Cannizzo made her orchestra concert debuts of Richard Strauss’ Vier letzte Lieder and the Soprano Soloist in Carl Orff’s Carmina Burana. She was then featured as Bel Canto Young Artist at Caramoor where she covered Leonore in Beethoven’s Fidelio. Other recent roles include Violetta in La traviata, Lucia in Lucia di Lammermoor, the Countess in Le nozze di Figaro, Micäela in Carmen, Cio-Cio San in Madama Butterfly, and the soprano soloist in Verdi’s Requiem and Mendelssohn’s Elijah. This season brings an oratorio debut of the Soprano Soloist in Handel’s Messiah with the South Dakota Symphony Orchestra.

Ms. Cannizzo was chosen as one of the finalists to receive a grant in the Fritz & Lavinia Jensen Foundation’s  Vocal Competition. She has also received awards from the Liederkranz Foundation, the Accademia Musicale Chigiana, the Raina Kabaivanska Fund, the America for Bulgaria Foundation, the New Jersey Association of Verismo Opera, the Metropolitan International Vocal Competition, and the New Jersey State Opera Competition. She holds a Master’s degree in Music from Binghamton University and a Bachelor’s degree from the University of Chicago.