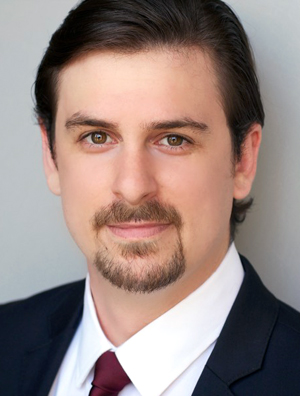 American baritone Tim Renner recently debuted Escamillo in Carmen in Tokyo with the new National Theatre in a new production, followed by Zurga with Opera Tampa, Marcello in La Boheme with Lyric Opera of Kansas City and Escamillo with Manitoba Opera. He also returned to AVA as a special guest to debut the role Alphonse in La Favorite. This season he debuts Palm Beach Opera as Morales in Carmen.  Mr. Renner recently completed the Doctor of Musical Arts Degree in Vocal Performance and Literature at University of Illinois, where he studied with tenor Jerold Siena and was the recipient of the prestigious Howard Stotler Fellowship for two consecutive years, as well as the Jospeh W. Schlanger Memorial Opera Scholarship. Recent roles performed also include Alidoro in Greenville South Carolina where his voice was lauded as  “boasting a rich resonant baritone.” While studying at the Academy of Vocal Arts in Philadelphia between 2016 and 2018 he performed Conte di Luna in Il Trovatore, Rigoletto, Alberich in Das Rheingold and Harlequin in Ariadne auf Naxos. He has also performed Germont in La Traviata with Opera Columbus, Riolobo in Florencia en el Amazonas, Javert in Les Miserables, Dulcamara in L’elisir D’amore, and Reverend James Morell in A Minister’s Wife. Before attending University of Illinois, Timothy earned his Bachelor and Master’s Degrees from Bob Jones University where he studied with Jean Greer, and graduated Summa Cum Laude. In addition to being and outstanding young singer, Tim is an accomplished pianist, accompanist, vocal coach, stage director and conductor.

Other recent debuts include Vero Beach Opera as Eisenstein in their new Fledermaus in January and last summer in performance with the Ravinia Festival singing five selected “Romances” by Rachmaninoff with the Ravinia Stearns Music Institute Program in their first concert of the season. Other recent concert performances include Carmina Burana and Fantasia on Christmas Carols with the Eastern Symphony Orchestra at Eastern Illinois University, and the bass in the St. Matthew Passion with Sinfonia de Camera. Recent awards for MR. Renner include winner of the Mario Lanza Instiutue Scholarship for 2015-16, first prize at the S. Livingston Mather Scholarship Competition in Cleveland, Ohio, and 2nd prize at the Orpheus National Vocal Competition in Muurfreesboro, Tennessee (in 2013 and 2015). He has sung with such esteemed conductors as Eric Weimer of the Lyric Opera Chicago, and Eduardo Diazmunoz, Chair of conducting at the Sydney Conservatorium of Music. He has sung in various private recital settings in recent years as well. He was also a participant in Sugar Creek Opera’s Young Artist Program performing Die Zauberflöte.