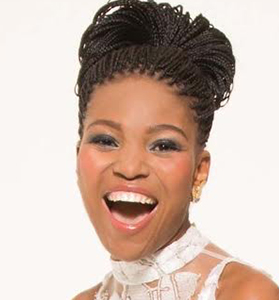 “One of today’s most exciting new operatic voices”  – Independent

South African soprano Pumeza Matshikiza is one of today’s rising opera stars. Being an exclusive Decca Classics recording artist, she already released two albums: her debut album “Voice of Hope”, featuring arias and traditional and popular African songs, and “Arias” with a selection of operatic arias and songs from her current repertoire.

In the 21/22 season Pumeza made her house and role debut as Fox in Janacek’s The Cunning Little Vixen at the English National Opera. Besides that, she has appeared at the ENO as Moira in the world premiere of The Handmaid’s tale, written by Poul Ruders. In addition, she returned home to South Africa to give two recitals in Johannesburg and Durban and appeared with WDR Funkhausorchester in the special New Year’s Eve concert at the Essen Philharmonie.

Highlights of the 20/21 season include house and two role debuts as Bess and Serena in a new production of George Gershwin’s Porgy and Bess at the Theater an der Wien. The soprano was also heard in a gala concert alongside Rolando Villazón at Sopot Classic Festival and in a solo recital for West Wicklow Festival Ireland, broadcasted at DG Stage. Scheduled concerts at LSSO Summer Festival, and the Pažaislis Festival in 20/21 and a tour with Boston Philharmonic Orchestra in 19/20 were cancelled due to COVID. Recent seasons include the title role of Antonin Dvořák’s Rusalka, which has quickly become one of the signature roles of the South African soprano. After her acclaimed debut with Theater Klagenfurt in 2018, the part was the vehicle for taking Pumeza to two other exciting new productions in the 19/20 season: at the Opera National du Rhin she headlined the production of Nicola Raab, with Anthony Hermus conducting. The second production took the soprano to the Vlaanderen Opera, making her house debut in a new production by Norwegian choreographer Alan Lucien Øyen. The production was recorded and shown on Operavision’s website. In 18/19 season Pumeza made her US debut performing one of her signature roles, Mimì, in Puccini’s La Bohème, with Dallas Opera. Mimì was also the role for her house debuts at Dresden’s Semperoper and the Hessisches Staatstheater Wiesbaden. Pumeza made her Teatro alla Scala debut as Eve in the world premiere of Giorgio Battistelli’s CO2. The highly acclaimed production was staged by the renowned contemporary opera director – Robert Carsen, with a libretto by British dramatist Ian Burton. As a five-year ensemble member of the Staatsoper Stuttgart, Pumeza Matshikiza appeared as Micaёla (Carmen), Mimì (La Bohème), Susanna (Le nozze di Figaro), Ännchen (Der Freischütz), Zerlina (Don Giovanni) and Pamina (Die Zauberflöte).