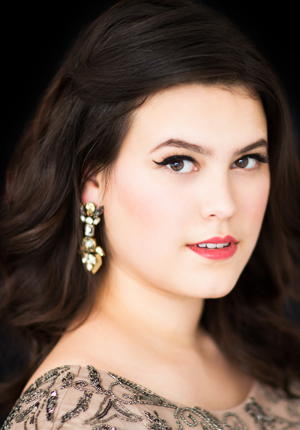 “We heard a Lucia sung the way we always dreamed it- with gorgeous, crystalline highs and a powerful mid-range, yet painted with delicate coloratura vocal details that are spine-tingling, and all supported by a strong, credible interpretation” -Arts Knoxville

Soprano, Meryl Dominguez, most recently performed the title role in Bellini’s Norma in Hong Kong with Musica Viva in July of 2021.Prior to that she performed the title role in Lucia di Lammermoor with Knoxville Opera, and a concert with the Dallas Opera presented by Opera for Peace. Ms. Dominguez recently returned to Santa Fe Opera where she made her debut singing Naiade in Ariadne auf Naxos. As an Apprentice Artist with the Santa Fe Opera, she also covered the role of Oberto in David Alden’s production of Alcina.  For the Academy of Vocal Arts she performed a variety of roles including Violetta in Verdi’s La Traviata, Zerbinetta in Richard Strauss’ Ariadne auf Naxos, Die Königin der Nacht in Mozart’s Die Zauberflöte, the title role in Donizetti’s Lucia di Lammermoor, Donna Anna in Mozart’s Don Giovanni, Rosalinde in Johann Strauss’ Die Fledermaus and Adina in Donizetti’s L’elisir d’amore.

Included with her passion for the operatic repertoire is an enthusiasm for art song and contemporary music. Recitals have included LyricFest in a premiere of John Musto’s Be Music, Night. Additional recitals have featured Lili Boulanger’s Clairières dans le ciel, Debussy’s fêtes galantes II, Strauss’ Brentano Lieder, Britten folk songs, Poulenc’s fiançailles pour rire, Rachmaninov op.38, Wolf’s Spanischesliederbuch and selections from Musto’s Penelope.  Upcoming concerts include a collaboration with harpist Parker Ramsay presenting a multifaceted recital, spanning poetic genres and cultures.Under the guidance of Ms. Marilyn Horne, Meryl attended the Music Academy of the West, where she was featured in masterclasses and concerts.

In the competition sphere, Ms. Dominguez most recently won first place in the 2021 Vero Beach Rising Stars Opera Festival Vocal Competition. She was an Encouragement Award winner with The Gerda Lissner Foundation, as well as a being a Grant winner from the Giulio Gari Foundation.

Ms. Dominguez is a graduate of the Academy of Vocal Arts in Philadelphia, as well as a double degree graduate of Oberlin, from which she holds degrees in Voice and in Dance, concentrating on the narrative and storytelling aspects of movement.