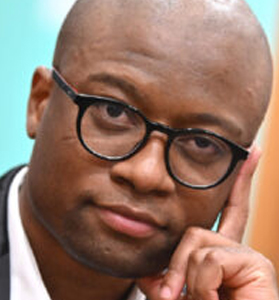 South African baritone Martin Mkhize has for the past two seasons been a member of the opera studio at the Dutch National Opera.  For the DNO he has been featured in the following productions: Il Barbiere di Siviglia, Madama Butterfly, Il Martimonio Segreto, Carmen, and is currently preparing for the role of Garbi in the world-premiere of Il Ritratto.

Prior to joining the DNO Studio he appeared in the 2017-2018 season at the Bregenz Festival Studio as Figaro in Rossini’s Il Barbiere di Siviglia. In that same season he appeared as Papageno in Mozart’s Die Zauberflöte, and Figaro in Le Nozze di Figaro, both with the Cape Town Opera.

Past performances have included Dandini in La Cenerentola, Betto di Signa in Gianni Schicchi, Don Prudenzio in Il viaggio a Reims, Marchese d’Obigny in La Traviata, and Nsimane in the opera Blood of Mine by the South African composer Sibusiso Njeza.  He appeared in Mozart’s Don Giovanni as part of the Darling Music Experience and toured in Germany and the Netherlands with African Angels, a concert production by Cape Town Opera.

In concert Martin has appeared in various recitals with the Sic Itur ad Astra Foundation.  He has performed The Festival of Beautiful in Teatro Pincipal de Palma, Verso le stele at the Teatro Rossini Pesaro, Casa da Música Porto in Porto, Portugal, and in gala performances with the Saint Petersburg Philharmonic in St. Petersburg.

Martin Mkhize studied at the University of Cape Town, where he won the first prize and the audience award at the Schock Foundation Competition.