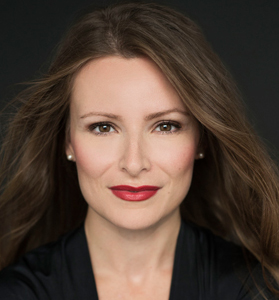 “The audience gravitates to her instantly and it was hard to shift your gaze away or relinquish any attention to the luminous spectral qualities of her fine singing instrument. MacMillan’s performance was a true highlight”
– Stephen Bonfield, Calgary Herald

Canadian-Italian Mezzo Soprano Danielle MacMillan has been praised by critics for her ‘luminous spectral qualities’, her ‘intelligent approach and sensitive singing’, her ‘ethereal tone’, and has been described as ‘convincingly scheming’, and ‘seductive and ingenuous’. Last season she made her Nashville Opera debut as Wellgunde in Wagner’s Das Rheingold, premiered All Is Love with Opera Atelier, and was heard in concert singing Mahler’s Lieder eines fahrende Gessellen with the Cathedral Bluffs Symphony in Canada. This season she debuts Opera Manitoba as Dorabella in Cosi fan Tutte. Recent performances have included  Something Rich & Strange, and the Second Lady in Mozart’s Die Zauberflöte(canceled due to COVID) for Opera Atelier, Zerlina in Don Giovanni, and Cherubino in Le Nozze di Figaro both with Palm Beach Opera, and Agni in Vivier’s Kopernikus for Against the Grain Theatre. As a Studio Artist for Palm Beach Opera, she performed Edith in Pirates of Penzance, Countess Ceprano in Verdi’s Rigoletto, the Komponist (cover) in Strauss’ Ariade auf Naxos, Suzuki (cover) in Puccini’s Madama Butterfly, and Mercedes (cover) in Bizet’s Carmen. For the Canadian Opera Company, she has performed the Second Niece in Britten’s Peter Grimes, Dorabella (Studio Artist Performance) in Mozart’s Cosi fan tutte, and Garcias (cover) in Massenet’s Don Quichotte.

On the concert stage, Danielle performs regularly as a soloist with the Toronto Classical Singers including Mozart’s Mass in C, Puccini’s Messa di Gloria, Salieri’s Mass in D, Saint-Saens’ Christmas Oratorio, Bach’s Magnificat, Mendelssohn’s Elijah, Haydn’s Lord Nelson Mass, and Schubert’s Mass in C. Other concert engagements include Beethoven’s Ninth Symphony with the North York Concert Orchestra and with the Kindred Spirits Orchestra, Handel’s Messiah for the Masterworks Chorus of the Palm Beaches, and Mozart’s Requiem with Against the Grain Theatre.

Danielle was a Regional Finalist in the Metropolitan Opera National Council Auditions, First Prize Winner in the St Andrews International Aria Competition, 1st Place Winner of the Clifford Poole Vocal Competition, and a semi-finalist in the Deborah Voigt International Vocal Competition. She was a member of the Palm Beach Opera Studio and the Canadian Opera Company Ensemble Studio, and a graduate of The Glenn Gould School of the Royal Conservatory of Music.