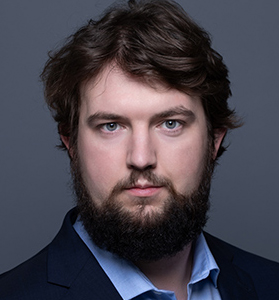 Recognized for his “sonorous tone” (SF Classical Voice), and his “commanding stage presence” (SF Gate), Benjamin Brady has quickly distinguished himself as a bass-baritone of prominent importance. His most recent performances include Colline in La Boheme with Opera Modesto, Sprecher in The Magic Flute with Eugene Opera, Beethoven’s 9th Symphony with the North State Symphony, Handel’s Messiah with the Adrian Symphony, and the role of Dulcamara in L’elisir D’amore with Cal Baptist University. This season he performs Fafner in Das Rheingold with Dayton Opera, Colline in La Boheme with Eugene Opera, and makes his debut with Opera San Jose as the King in Alma Deutscher’s Cinderella.

Other recent  engagements include Dottore Malatesta in Donizetti’s Don Pasquale at the Mendocino Music Festival, the Page in Donizetti’s Roberto Devereux with the San Francisco Opera, Banquo in Verdi’s Macbeth, Zaccaria in Nabucco and Rocco in Beethoven’s Fidelio with West Bay Opera.

In 2018 Mr. Brady was awarded the Audience Favorite and First Place awards in the Tier II Category of the James Toland Vocal Arts competition in Oakland, CA. Later that year he was selected to advance to Regionals in the San Francisco District of the Metropolitan Opera National Council Awards. In 2020 he was selected to be a semifinalist for the Metropolitan Opera National Council Awards.

Benjamin had the honor of participating in the Merola Young Artist Program at San Francisco Opera in 2021, and he will be an apprentice artist at the Santa Fe Opera in 2022.

Originally from Denver, Colorado, he received his BM in Vocal Performance at the University of Michigan.